Dolpo is in the northwest of Nepal, lying between the Tibetan Plateau and the Dhaulagiri mountain ranges. Upper Dolpo Trek is the northern part of this region, even more, remote and only opened up to tourists at the end of the 1980s. As it lies near to Tibet, it is considered a restricted area and a special permit is required to come here. As a result of all of these factors, this area retains its ancient Buddhist way of life and does not see many trekkers. Although the walking days are relatively short, it is an arduous trek due to the high altitude. A right level of fitness is a must on this trek, especially on the difficult trails which are often narrow and barely visible. You might have seen Eric Valli’s film, ‘Himalaya’ and if so this will give you a good idea of what to expect! But even if you missed the movie, be guaranteed, this is a trip of a lifetime. 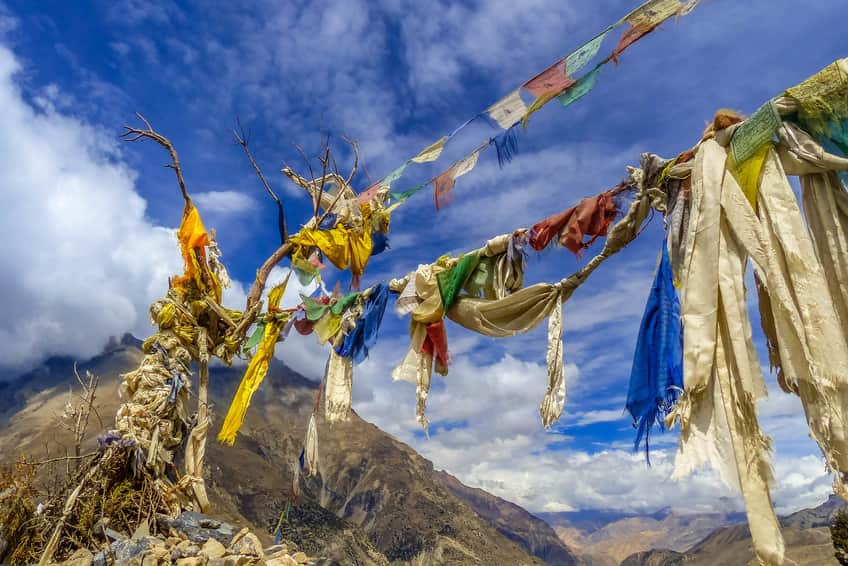 Aside from the challenging paths, on this trek, you will visit Shey Gompa and other Buddhist monasteries, visit the turquoise Phoksundo Lake and Crystal Mountain, with its cliffs of quartz and marine fossils, get spectacular views of Dhaulagiri, witness Tibetan culture, including the Bon Po sector of Buddhism (rarely practiced elsewhere) … the adventure goes on! Being part of the Shey Phoksundo National park, wildlife is present, even if you don’t see it – the rare snow leopard for example. At the complete opposite end of the scale, the trek starts (and ends) with a flight from Kathmandu to Nepalganj. Being a border town on the Nepal/ India border, Nepalganj has a very Indian feel to it and is undoubtedly much hotter than the cold climate of Dolpo.

Day 1
Flight from Kathmandu to Nepalgunj
Early in the morning with our necessary luggage, we will fly to Nepalgunj from Kathmandu. Nepalgunj is one of the city of Nepal which lies in the west part. It might be sweltering compared to Kathmandu because of the lower elevation from the sea level. The culture and people living there are influenced by Indian society as this city is close to India. After reaching to Nepalgunj, we will take rest at the day time and stroll around at the evening due to the hot temperature at the day.
Day 2
Flight from Nepalgunj to Jhupal and Trek to Dunai

Today we will take a flight to Jhupal from Nepalgunj. Jhupal is only one airport and the locals to go to other parts of the country. While on the air we will view the astonishing Landscape along with Dhaulagiri and Annapurna range to the north. The roadway to Dhadang has been opened now, which has increased the hope of Dolpo people for alternative transport. Upon arriving on Jhupal, we will trek downward and narrow gorge to Dunai, which is administrative headquarter of Dolpo.

Day 3
Trek from Dunai to Ankhe

Passing via several uphill and downhill, we will walk towards Ankhe with the view of Kagmara Peak above the valley. Crossing the suspension bridge, which is new, we will follow the trail to the west. On the way, we will encounter winter settlement are of people from Upper Dolpo. Here, during the winter, they bring down their herds of Yak and Cow to get rid of extreme snowfall. Similarly, the route starts to climb uphill where the area is treeless Thulo Bheri valley. Walking through the ridge there, we enter the Phoksundo River Valley. Near the Phoksundo National Park, Ankhe is located, which is our destination today. We will spend our night there before entering the National Park.

Day 4
Trek from Ankhe to Sulighat
The path is small uphill and downhill along the forest with rivers from Ankhe to Sulighat. We need to ascent up steeply to the elevation of 2900m from sea level with numerous streams on the trail. Slowly the forest disappears, and the grassy path starts high above the rivers. At the end of the trail, we will encounter a rocky road that is more technical for walking where the local people run away with their Yak and Shee, just out of imagination. Finally, we will cross the bridge near Ryajik village. Spend overnight there.
Day 5
Trek from Sulighat to Phoksundo Lake

We will continue our trip today from Sulighat to Phoksundo and Pungmo Khola. Firstly, we will cross the west side of Phoksundo Khola passing the wooden bridge and go to the way of Phoksundo Lake near Ringmo valley following the west bank of Pungo Khola. Today walking distance of around 5 hours shifts us to RingmoValley with traditional Chortens as well as long Mani wall. Heading the path of the forest with Ceder and Palam, our trail goes uphill to an open place. Once we settle in Ringmo, we have an entire afternoon to explore the shores of Phoksundo Lake.

The trek continues with passing the Lake following the rocky path along the western bank of the river, heading towards Phoksundo Khola from Phoksundo lake. The trail leads towards lush meadow opening into plain Phoksundo Khola. After, we will reach the valley and walk again, crossing the river. We will set our camp nearby Phoksundo Khola and spend our night there.

Early in the morning today, we will walk along the flat path through the northern side. There is an old wooden bridge near Phoksundo Khola and the mountain stream. In the end, there will be a long climb where we will encounter steep canyon. Further ahead from the valley, we will climb the hard ridge. We can see Kang La pass from there. Similarly, the pass leads to She Gompa. Just nearby this ridge of a pass from where we can see Kangla Pass. Stay overnight.

With technical uphill climb, it might be quite strenuous to cross Kang La because of poor trail marking through the rocky slate. Once we summit the top of Kang La, we can have a fantastic view of the valley on the next side of Kang La pass. We will descend steeply again toward full of She which is just about to be bisected by Gushing River. We will trek through the bank of river crossing it several times. Passing through grazing field with hundreds of Yak and Sheep we will find ancient red Chorten that announce our arrival in Shey Gompa at an elevation of 4500 m from sea level.

Day 10
Acclimatization day in She Gompa

After this long, challenging hike to Kang la and higher elevation area, we will spend another acclimatization day in She Gompa. The Land on Bon She is famous for its biggest monastery in Nepal, i.e., Shey Monastery that is also known as Crystal Monastery as in Tibetan Language Shey indicted Crystal. Another highlight of Shey Gompa is Crystal Mountain east to Gompa, which looks like it is entirely made up of crystal quartz. We will explore around Shey one prehistoric village with Bon culture.

We start with descending trail toward the stony valley from where we will be following the rocky twisted path toward the top of Saldang Pass, which is around 5200 m in elevation from sea level. Onward we will descend again toward the village of Namduna, which is accompanied, by another red stone monastery and numerous Stupas where only countable small stone houses do exist probably highest settlement in Nepal at an elevation of 4800 m from sea level.

Hiking up with rubble slopes we will head toward Saldang through Barren Mountain, which might be dusty. The largest settlement on Upper Dolpo, Saldang is unique in appearance with eighty house and approximate seven hundred people, which is stretched around 2 kilometers on an open slope. It is a center point for Dolpo people for Trans Himalayan Tibet people in term of trading.

Yangze Gompa probably the least explored area by any professional trekkers and hikers is on far north wild barren terrain field. We will pass via small village settlement of Tiling and Lurigaon upon reaching Yangze Gompa we will explore ancient prehistoric Bon-Po Monastery and village area of Yangze Gompa.

We will trek back a bit toward Saldang Village, passing through Chaiba Monastery near Namdo, which is a second biggest village with around 400 inhabitants with six households. Exploring Namdo Monastery near the riverbed, we will trek next two hour to reach the small settlement of Sibu.

Early morning in Jeng La we can encounter with caravan of yak heading toward Tibet Border, from where we will hike up next five to six hour, last part is bit steep to bottom on Jeng La at elevation of 4900, where we will spend a night before traversing ahead of Jeng La.

Final two hour of uphill trail leads us to summit of Jeng La from where we can view excellent southern Himalayas Range. We will descend down toward Dho Tarap Valley through rocky trail; we will spend our night at Tokyu Monastery at elevation of 4200 m before heading toward Dho Tarap.

Wetland similar to Tibet and Ladakh, we will trek toward Dho Tarap completely different trail and terrain in compare to previous days trek. Beautiful village of Dho Tarap is accompanied by both religions of Bon and Chaiba with religious harmony. Few Tibetans and rest by Dolpo People accompany Dho Tarap with forty houses in total.

One beautiful time on Dho, we will explore both Buddhist and Bon Gompa; explore culture of people and villages, without any hard walks or up and down, as idea is just to take an adequate rest after long walks. Be friend with local people and spend one more night in Dho Tarap.

We start descending toward wide valley, which in the end turns, into narrow gorge, crossing through juniper, rose small bushes apart from big tree. We might encounter with herd of wild blue sheep. Just near by caves we will settle down our camp for overnight stay in wild section do Tarap.

Passing through very narrow gorge with possibilities of jump from one side to another we will trek down with absence of trail. Today its adventure as well as tricky section so follows footsteps of your guide in most of part and listen to his instruction cause sometime bridge might have been damaged or swiped away. We will settle somewhere near Tarap Khola at Khanigaon.

Day 21
Trek from Khanigaon to Tarakot

Now our wild and unexplored section of Dolpo Trek are almost finished as we will be hiking on regular trail passing through villages in lower section of Dolpo. We will hike up in total of around five hours from Khanigaon to Tarakot upon reaching Tarakot we will hike up little bit just next ridge of Tarakot where there are Chorten and Gompa we will settle there.

Day 22
Trek from Tarakot to Jhupal

Second last day of our Dolpo Trek we will walk beside Bheri River along gorge with pine trees, we will hike around eight hours in total quite long but demanding trail. Last night in Dolpo with celebration of successful Dolpo Trek might be a nice way to farewell porter and other crew as only guide will be flying back to Katmandu with you cause we choose porter from local area of Dolpo.