One of the popular routes passes through Lamjung, Manang, Mustang and Myagdi districts of Nepal, Annapurna Circuit via Tilicho Lake giving a glimpse of both Hindu and Buddhist lifestyles. Also, you will be able to learn something of the Bon religion, a rare branch of Buddhism while on a trek to Tilicho lake Trek.  The lake itself is situated at 4,919m and is the highest lake in the world for its size.  Once crossing the Thorong La pass (5,416m) the trail joins the Annapurna circuit route where the walking becomes easier on this, otherwise, demanding trek. 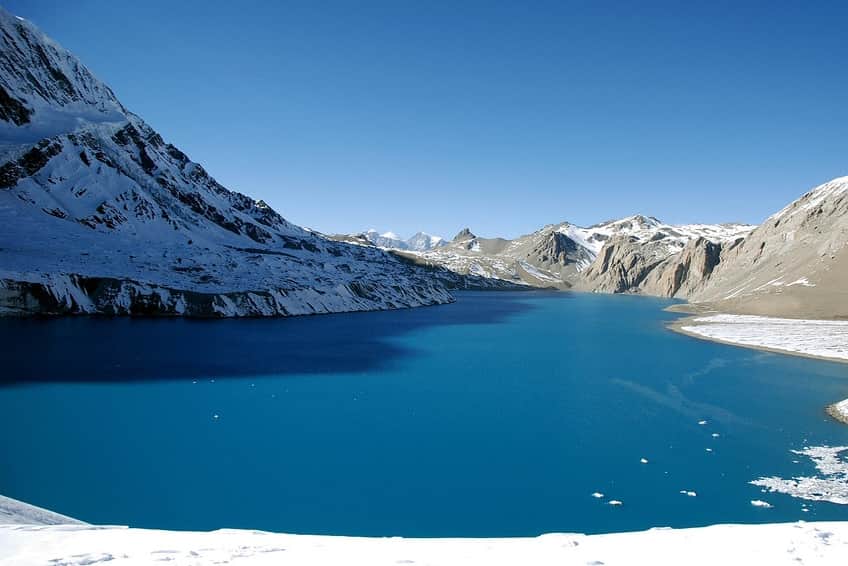 The route through Manang passes through subtropical countryside, through alpine forests, and along dry cliffs.  Formed by glacier melt from the Annapurna, the Tilicho Lake is of religious significance, being mentioned in the Ramayana, in Hindu religious book.   After the Tilicho Lake and Tilicho Base Camp, walkthrough yak pastures out of the Marsyangdi Valley and over the Thorong La. The mountains on view during this trek include Mt Gudang, Syagang, Thorong Peak and Mt Khatungkan as well as those around the lake.  Namely, Tilicho, Nilgiri, and Khangsar.

Once over the pass, the first village is Muktinath, with its famous Hindu temple, water spouts, and eternal flame.  Further on, Kagbeni brings us back to the Buddhist religion with its monastery. Also, the gateway to the Upper Mustang Trek.   The next settlement is the town on Jomson with its airport and market town lively buzz.  Marpha, a short walk from Jomson, is famous for its apples and apple brandy. Only a few more days of trekking now until you reach the soothing hot springs at Tatopani for a well-deserved soak! Or until the Annapurna Base Camp If you want to take a further hike. The same trail which passes through the Poon Hill (A famous viewpoint of all in Annapurna Region)

Day 1
Drive from Kathmandu to Dharapani

Early in the morning we will drive for 6 hours to Besishar, have our lunch and take Jeep for 3 hours to Dharapani. After we will drive via Jeep, passing many villages like Jagat, Chamcha, Tal, and so forth. We will also cross a lot of suspension bridges and view waterfalls. On the way, there is Marsyandi Hydropower, green hills. We will reach Dharapani and stay overnight.

Trek to Chame from Dharapani takes 6-7 hours on walking. There is the roadway too, but we will hike as to feel the refreshing nature. 40% of our hike is on-road. We will pass through the forest, crossing the suspension bridges. Similarly, Villages like ChariKharka, Timang, and Koto is on the way.

Moreover, you will be amazed by the view of Manaslu and other mountains along with monasteries. Walking on the uphill trail and flat road we will reach Chame, the headquarter of Manang. We can find all the facilities in Chame.

It takes 6 to 7 hours to reach Pisang from Chame. Crossing villages like Bhartang, Dhikur Pokhari, etc. we will reach Pisang. Dhikur Pokhari is a big village where people are engaged in apple farming. Walking through the way which is mostly uphill and slightly flat, we will pass through forest and cross suspension bridges. The people here have Tibetan culture with a distinct tradition and dress. The monasteries and prayer flags throughtout are astonishing.

Today, we will head towards Manang from Pisang. Starting our walk to reach Ghyaru for 3 hours, we will be facing a 1-hour flat trail and the remaining uphill. If the weather is clear, we can see the view of Pisang, Annapurna ranges closely. Likeise, we will move towards Nyawal from Ghyaru walking for about 2 hours. After reaching Nyawal, you will see many monasteries, prayer flag, and the distinct Tibetan People. You may feel like you are in a different world. On the way, we will pass through the small bushy area, enjoying the view of many peaks. Similarly, we will head towards Manang, walking for about 3 hours. Manang is a big village od Annapurna area. Every kind of facilities like massage, shop, wifi, electricity is found there. Passing the villages Barkha and Humdin Airport we will reach our destination. Stay overnight.

Acclimatization implies the day when we remain at where we arrived last time and make some side outings of that place. Today, we will hike for about 1 hour up to Gangapurna Lake (3,800m). From there the view of Annapurna ranges, Chu La ranges can be seen. After that, we will descend crossing the suspension bridge and straight forward and get back to Manang.

We will for 7 hours today to reach Tilicho Base Camp from Manang. Walking through Khansar, SiriKharka our destination Tilicho comes. The way to SiriKharka from Manang is up and down and flat whereas the way from Sirikharka to Tilicho Base Camp is Difficult as we will follow the route of Landslide area. From there we will be able to view Annapurna ranges, Chulu ranges as many monasteries. The tilicho base camp area has less oxygen, so you may feel difficult while breathing.

Earlier today, we will walk for about 3 hours to reach Tilicho Lake from Tilicho Base Camp. The trail is uphill and a bit difficult to walk. On the way, one can see the mountains closely. Likewise, Blue sheep and birds will highlight this trip. Moreover, we will have our lunch at Tilicho Base Camp and return to Sirikharka carefully as the way is Landslide way.

Day 8
Trek from SiriKharka to Manang

Today we will get back to Manang from Sirikharka which takes 2 to 3 hours all the way down.

Day 9
Trek from Manang to Besisahar

Day 10
Drive back to kathmandu from Besisahar

Today is the farewell day when we will say goodbye to the beautiful place and fly back to Pokhara. From Pokhara we will be driving back to Kathmandu.

Expand/Close
What is the best time to trek Tilicho lake?

The best time to trek Annapurna is March, April, September, October, and November.

What would be the food and accommodation during the trek?

What are the permit requirements for Tilicho lake trek?

As Tilicho Lake lies in Annapurna region we need to have a conservational area project (ACAP) permit to enter. The cost of the permit is Rs 3000 for foreigner and Rs 300 for the SAARC countries including vat.

Tilicho Lake is not that hard. With proper itinerary, equipment, and guide, it can be done. Slow down your pace, drink plenty of water and rest, that's how you will reach Tilicho lake.

Is there a toilet available while I am hiking? Is it squat or western toilet?

There are no public toilets along the way. If you are nearby the village, in this case, you can go to the tea house otherwise you will go to the separate place nearby you.

Can I trek Solo?

Yes, you can but its a newly opened trekking trails so it is better to go with a professional guide. Also, the government of Nepal has made a rule that trekkers should take the guide for most of the trekking regions.

Do we need the physical train?

What kind of food will be served during the trek?

Normal to high-quality food is served according to the will of trekkers during Tilicho lake trek.

How long wills the trek takes to finish?

The trek takes 10 days to finish.

How many kilos is the baggage allowance?

As per the airline's rules and regulation you can take 10 kilos of luggage and 5-kilos hand carries so that would be a total of 15 kilos baggage allowance. If you want to take more than 15 kilos, you have to pay an extra USD 1 per kilo. But you can also trek by bus and private jeep which means you can carry more if you want.