Langtang Ganja la Pass Trekking is an adventurous, and challenging route that takes you through the Langtang Valley and over the Ganja La pass.  The Valley is well renowned for its beauty and lush vegetation, and friendly Tamang people.  In fact, the Lama Hotel, where we will spend the night, is extremely famous amongst trekkers and locals in terms of location and friendliness of the owner.   The Tamangs are closely related to Tibetans and so there are plenty of prayer flags, chortens, mani stones and other Buddhist related artifacts along the trail.  Previously a restricted area due to its close proximity to Tibet, this area only opened up to trekkers in more recent years.  On this trek, we will visit the Kyanjin Gompa to experience more Buddhist culture. 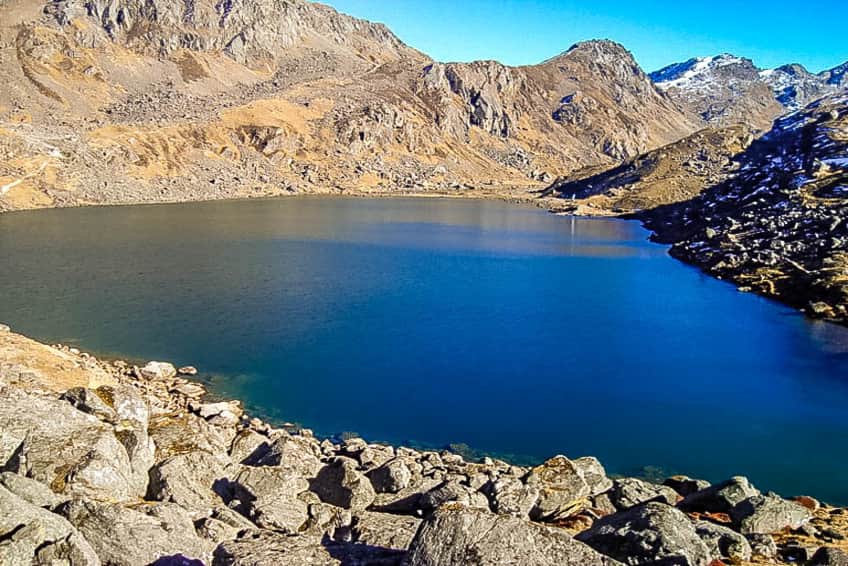 To acclimatize for the Ganja la Pass, we ascend the Tsergo Ri, which is also around the 5,000m mark and offers stunning mountain views.  Then on through rhododendron forests, along raging rivers until we reach the highest point of the trek. Ganja La pass at 5,122 meters, is a difficult, snow-covered pass. But as a reward, there is a long list of mountains on view: Dorje Lakpa, Loenpo Gan, Mount Langtang, Kangchenpo…   and the icefall from Langtang Lirung. By the end of this trek, we are in the Helambu Region, with its Drukpa Kagyu form of Buddhism which comes more from Bhutan than Tibet.

Early in the morning today we will leave Kathmandu with a short drive which is 5-6 hours far to reach Syabrubesi. We will drive uphill trails over the ridge as we start going further from Kathmandu. On the way, we will see the fantastic view of Annapurna ranges in the west, Manaslu, Ganesh Himal, and some peaks of Langtang. Driving along the Trishuli river, we will get to Syabrubesi. The way of Syabrubesi is through Dhunche.

Walking gradual flat and uphill path wth the landslide way, we will head to Lama hotel. It takes 5-6 hours to get to Lama hotel from Syabrubesi. Likewise, we will pass through the forest viewing green hills. The route also gives a chance to encounter some of the aerial lives and bee hives tightly hanging on the cliff. Crossin the Bhote Koshi river we will pass oak and rhododendron forest. The trip will amaze you with the beautiful all-encompassing perspective.

Similarly, we can see some Langur monkey on the way. The accommodation and food are comfortable. Stay overnight there.

Today we will trek to Langtang valley from Lama Hotel following the upill path which is 7 hours far. On this day we will proceed our journey to reach Ghoda Tabela, i.e., horse stable after walking through the dense forest of rhododendron and pine. As we continue, we go over the impressive perspective of Langtang Lirung. The trail will give us a chance to encounter lifetime enjoyment with the view of watermills, prayer wheels, and Chortens. The way to our destination today is uphill. Following Lantang Khola and watching the look of Donkeys carry the load, we will head further. In this place, there are many Buddhist monasteries. Also, there is a big glacier that was formed in 2015 due to the devastating earthquake. We will pass to Mundu village and reach Langtang valley. Stay overnight at Langtang valley.

Leaving the great Langtang valley trek behind, we will walk for around 4 hours. We will cross several wooden bridges to reach Kyanjin Gompa, all the way flat and at last uphill. Kyanjin Gompa is the peak purpose of our trip at the height of 3817 meters from sea level. The beautiful vistas of mind-blowing Mt. Ganchempo and Mt Langtang itself from Gompa will be recorded in your memory for the entire life. Further, the trek will take you to the path with nearby local houses, a cheese factory. It will enable you to assemble new and one of a kind encounter in regards to the local occupants and their way of life. We will have the view of Yala peak, big hills, and yak cheese factory on the path.

Today is the rest day of our trek; we will go to Tserko Ri for our side trip. You can also choose the trek among Danda or Chorka Ri or Pan or else Kangin Ri. The way is difficult today. However, the view is panoramic. Walking upward in the steep path we then reach to one of the side trip places. We can have the look of Langtang Peak from there, Stay overnight at Lama hotel.

Day 6
Trek from Kyanjin Gompa to Ngegang (4,200m), 4 to 5 hours
Early in the morning after breakfast, we will head towards Ngegang from Kyanjin Gompa, which is about 4 to 5 hours of walk. Firstly, we will walk steep up through the forest of juniper and rhododendron. Ascending high we then move to the area with small natural vegetation. We may have the scarcity of water on the wat, so it is better to carry a water bag and food ourself. There is a puzzle trail in the middle where we can get lost, so you need to be careful and follow the guide and your group. Similarly, after that we reach to the yak pasture of Ngegang with an incredible scenic view of mountains, yak peacefully grazing, etc. We will spend overnight in a tent.
Day 7
Trek from Ngegang to Keldang (4,270m) via Ganja La pass (5,106m)
Today we will head towards Keldang via Ganja La Pass which is 6 to 7 hours walk. We will continue the trail to the south through the way of stream and moraines. Since the passes are steep uphill the day seems to be difficult today. After, reaching Ganja La Pass, we can see it covered with snow all the time. We pass the small Lakes and climb Ganja La Pass on the rocky moraine. From there, the view of Langtang Lirung and the snowy summits of Tibet looks fantastic. Heading upward and downward the pass with the trick way we reach toKeldang. Stay overnight in Keldang.
Day 8
Trek from Keldang to Dukpu (4,040m) 6 to 7 hours
From Keldang we will walk to Dukpu for about 6 to 7 hours early in the morning. The trails to Dukpu ascends through grasslang, ridge, and other natural scenarios. Likewise, we then follow the settlement of people of Helambu. After that, we reach Dukpu and stay overnight.
Day 9
Trek from Dukpu to Tarkegyang (2,600m), 6 to 7 hours

From Dukpu, today we will walk downhill and then after uphill to the pass to reach Tarkegyang. It is 5=6 hours of walk from Dukpu to Tarkegyang. Similarly, we will go across the forests and then arrive at Gekye Gompa. After the steepy walk to downhill we can visit the oldest monastries and Sherpa village. Stay over nigh there.

Today, early in the morning we will head toward Kakani from Targegyang. It is 5 to 6 hours of walk. Kalanki is a popular picnic spot in Nepa with perfect view and easy way. Stay overnight in Kakani.

Walking from Kakani we will get to Melamchi Bazar. From there we will drive back to Kathmandi and take rest in our hotel room.