Jiri To Everest Base Camp Trek is as demanding as it is long. We recommend this trek only for serious hikers who are physically fit and willing to undergo the challenge!  To reach the starting point of the trek, at Bhandar, we have to drive around 6 hours from Kathmandu.  Even as you drive along the Koshi River, the Ganesh Himal mountain is there, waiting for you to start your adventure. From Bhandar the trail goes through the forest, across streams, across Lamjura La pass and through rhododendron forests, colorful in the spring, and over another pass, the Khari La until we reach Phakding.  You might be interested to know this is also known as the Classic Everest Trek and in the days before planes could land in the region, mountaineers, such as Sir Edmund Hillary, and Tenzing Norgay Sherpa, would have followed this path. 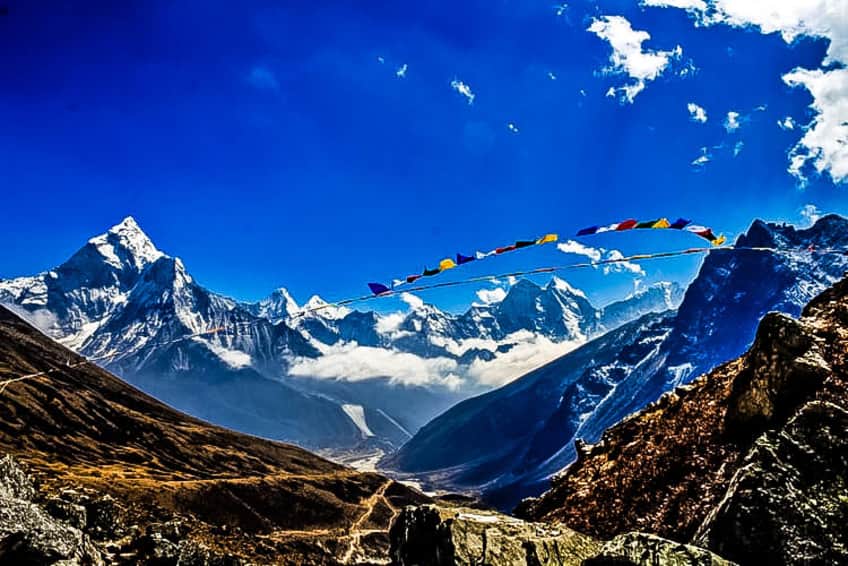 Today the route is not used as much, most people preferring to fly directly to Lukla (with the first overnight being at Phakding), but it is one of natural beauty and interesting Sherpa culture.  But the mountains are the same – Everest, Lhotse, Nuptse, Amadablam, Pumori, Thamserku and more!  Once we reach Phakding, the route follows the more usual one, taking us to Namche Bazaar, Tengboche, Gorak Shep, Everest Base Camp, and Kala Patthar.  At Namche Bazaar our thoughts again turn to the mountaineering expeditions of old, who would have restocked their provisions here before heading to Base Camp.  At Tengboche, we take in the amazing mountain vistas and perhaps send up a few prayers for those who climbed Everest in the past.  And then to reach Base Camp itself, we have a long day out of Gorak Shep, walking the same way as all those mountaineers have gone.  Finally, we see a 360-degree view of Mount Everest from atop Kala Patthar (5,545m) before retracing our steps and eventually flying back to Kathmandu from Lukla.  Perhaps thankful that today there are planes!

Highlights of Jiri To Everest Base Camp Trek

Day 1
Drive from Kathmandu to Bhandar (via Jiri)

Early morning, we will drive to Jiri along the streets of mountain which is 7 hrs of drive and 187 km away from the north east of capital. From Jiri we will further head out to Bhandar. The voyage won't bore you as you will get the view to see mountains along the roadway. The bewildering Koshi river will also be one of the aspects to watch. Likewise, you will be overpowered by the perspective of Langtang Lirung, Dorje Lakpa, and Ganesh Himal. We will stay overnight at Bhandar.

Day 2
Trek from Bhandar to Sete

The real trek starts from this day. We stroll down from deep forests going through the small villages like Dokharpa and Baranda. At that point, we track upwards to reach Likhu Khola Valley. Climbing the edge, we will make it to the Kenja. At last, we will steep climb to Chimbu and some further walk and reach Sete. We will stay the night at Sete.

Day 3
Trek from Sete to Junbesi

Today we pass the forests of pine, rhododendrons, maple, and birch to land at Lamjura La pass going through the villages of Dagchu and Goyem. Lamjura La pass is at 3530 meters acts about as a bridge between Jiri and Namche Bazaar. Strolling down to Tragdobuk and Junbesi, we will at that point have a nearby perspective of the local way of life. We remain at Junbesi until following day

Day 4
Trek from Junbesi to Nunthala

Following an hour of walk, you will be treated by tasteful perspectives of the Himalayas like Mount Everest, Lhotse, Nuptse, Makalu, Thamserku, and so on. The further trek will lead you upwards to Salung and after that downwards to Ringmo River making a rising to Ringmo crossing Trashindo La pass and again strolling down to Trashindo. We walk down further upon conifer and rhododendron forest to reach Nunthala. We will remain at Nunthala and spend the remaining day.

Day 5
Trek from Nunthala to Bupsa

Today we will lead the way of Dudh Koshi River as we head towards Khumbu. Proceeding with the move to Jubing after crossing the bridge to arrive at Churkha, we will head towards Kharikhola and descend crossing suspension bridge. Ultimately, we will trek to Bupsa and remain overnight there.

The track from Bupsa to Kharte is through the forested region. A lofty move from Kharte takes us to Khari La pass. You will be hypnotized by the perspective of Khumbila mountains en route after we will walk downwards to the Puiyan and walk further to reach Surke.

Day 7
Trek from Surke to Phakding

Today at first we move up to Chhiplung and afterward again move to descend to Phakding. We stroll for 4/5 hours today. We remain at Phakding overnight.

After having breakfast in the morning at Phakding, we will head towards Namche(3440m). Namche Bazar is frequently well known as the capital of Khumbu and a market of whole Everest region Trekking. We can discover hotels, lodges, resort, bar, snooker, bread kitchen, trekking stores and the retail establishment and fundamental items in Namche. It takes around 5 hours to reach Namche from Phakding with the steep path at the last part of the trek. However, it is said that hard work pays off, so after those precarious walk, you will arrive at the Everest View Point middle of the uphill towards Namche. From the perspective, the scene of Everest can be seen obviously. Decrease your pace, drink enough water and proceed gradually to Namche in light of the fact that toward the finish of the story "slow and steady always wins the race".

Usually, this day is named as the rest day by numerous individuals of the trekking organization. Be that as it may, it ought to be called as acclimatization day as one will trek the whole Khumjung and Khunde town on this day. Strolling for around 4 to 5 hours, today we will make a total visit or complete circuit of Namche. The adventure of Namche includes Sherpa Museum, Khumjung Airport, Everest View Hotel, Khumjung Village, Khunde Village, Hillary School and Government Development Yak Farm, etc. The walk will be delicate until you arrive at the head of Namche on the grounds that after there is steep up and the elevation is about 400m before dropping back. It will help a ton for acclimatization for the further higher rise on the coming days.

Tengboche Monastery is probably the oldest as well as the biggest monastery in Everest Region which is the focal point of fascination for the majority of Everest Base Camp Trekkers. It was constructed as it was pulverized by flame. Because of reconstruction, it looks new and bright. Likewise, the monastery held the praying ceremony every morning. Also, Mt. Everest is visible all the time from the whole part of Tengboche, alongside Mt. AmaDablam, Mt. Lhotse thus numerous different peaks. The individuals who are on Everest View Trek this is the last goal from them as they will retrace back entire way up to Lukla. But as a base camp trekker, we will further make a beeline for and if possible attend prayers in the monastery in the evening too.

Dingboche, which is a support centre for AmaDablam Expedition just as notwithstanding for Island Peak Expedition, is another town of local individuals. The majority of the individuals are occupied with potato-cultivating in this spot. A few hotels here offer a fantastic settlement with a perspective on Mt. AmaDablam. Toward the on the west, we can see Kongde Range on Namche. It is the main gateway for Island Peak Expedition as well as the way toward AmaLapcha Pass and Sherpani Cole Passes, which are extreme, trek in Everest Region. We will go through the following day for acclimatization again in Dingboche from where it is possible that we will either trek to Chukung or Nagarjun Viewpoint depending upon the condition.

Lobuche is the remote area, as housing is fundamental in this vicinity. House looks extremely basic from outside in spite of the fact that dinning and other inside is comparatively similar to the other on Everest Base Camp Trekking Trail. With one noteworthy tough from Thukla Hotel to Thukla Pass rest of trail are flat and gentle up. Notwithstanding, the altitude makes it hard to walk even in the flat way. The trail isn't so long so perhaps toward the evening we will wander around to the sides of Khumbu Glacier, that offer a fantastic perspective on icy masses in Everest Region.

Day 13
Trek from Lobuche to Gorakshep to Everest Base Camp.

The trail from Lobuche to Gorakshep is one of the most straightforward and short distance to cross as it takes 2 to 2.5 hours with all the way flat to Louche Pass. The little yet soak up way is available from where there is minor up and downs ahead till Gorakshep. Last however not the least our next trail is centre to exploration Everest Base Camp and Kalapatthar Trekking. After checking in at hotels and eating, we will begin trekking to Everest Base Camp, leaving our knapsack in the hotel. Despite the fact that the trek is gentle flat, the elevation makes it difficult. At last, a few strolls to the ice sheet are expected to arrive at base camp. It is around 4-hours stroll from Gorakshep to arrive at our goal Everest Base Camp. Getting a charge out of some time in Everest, we will go to Gorakshep.

Early dawn over the highest point of the world from Kalapatthar is one of the fundamental features of Everest Base Camp Trek. So to outline this minute we will begin our climb up to Kalapatthar promptly toward the beginning of the day. It will take around 2 to 2.5 hour to arrive at the summit of Kalapatthar. Contingent on the general time of sunrise we will set ourselves up. After the phenomenal perspective of sunrise over the top of the Mount Everest, we will plummet to Gorakshep for breakfast and further fall apart to Pheriche following a similar trail up to Thukla, from where we will diverse toward the downhill trail and follow of the bank of river till Pheriche.

Enjoying the view of rhododendron and bragging the stunning trek we had, we dive to Pangboche. The Dudh Koshi trail drives us to Sansa and after that Kyangjuma. At last strolling, through Chorten, we arrive at Namche Bazaar. We go through the night at Namche Bazaar.

After crossing several suspension bridges over the roaring Dudh Koshi River and its tributaries and enjoying the package of local cultures, customs and traditions we come down to Lukla. We remain at Lukla for spending the night.

After enjoying and celebrating and praising the goodbye at EBC with porter, we will fly back to Kathmandu and return to the hotel in Thamel. Refreshing ourselves, we will give some unwind to our body. At night, we will have farewell dinner along with feedback with entire NEST ADVENTURE groups and the cultural show during dinner.