Are you curious to know what Rainbow Valley of Everest Nepal is? I’m sure you are. It is no longer a mystery as there are many big-budget Hollywood movies and a dozen books available in the Market about the dark side of Mount Everest. And the top story is always the incident of the Rainbow Valley and the death zone in Mount Everest.

As a mountain guide from Nepal and the expedition leader of NEST Adventure, I’m anxious to share some of the facts about the death in Mount Everest, which created the colorful valley, also known as Rainbow valley near camp IV. 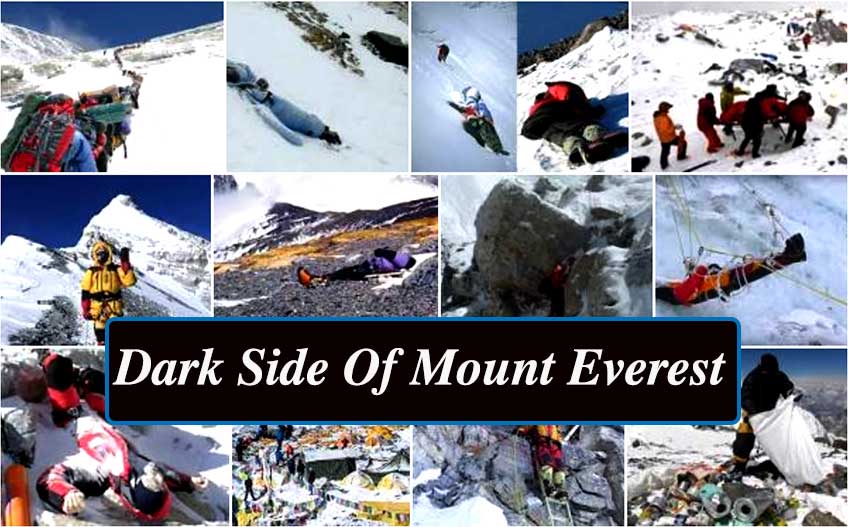 What is Rainbow Valley in Everest?

As much as it sounds so beautifully as you pronounce “Rainbow Valley,” the story behind the name is extremely disturbing. Located in the Northeast Ridge Route, the rainbow valley is a part of the landmark during Everest Expedition with full of dead bodies of climbers. The question is, why do they call it a rainbow valley? Well, the answer is simple; it’s a metaphor. The area covered with the dead body with brightly colored down jackets and expedition gear; that’s how it got its name as Rainbow Valley. It’s a small portion, down deep in the corner not like a “valley,” “valley,” you imagine.

Where is Rainbow Valley in Everest

“A Japanese woman named Yasuko Namba, Neal Beidleman and their team were considered too far gone to make it down the mountain alive. Their team agreed to leave them for dead.” This is the story you can watch in the Hollywood movie called “Everest.” But in the film, they didn’t show Yasuko Namba, and Neal Beidleman was left behind for her to die. Instead, they made up a story as she died in a storm.

But “Neal Beidleman” (the main character of the film) from Dallas, Texas, survived the night of the storm and walked camp IV on his own. While his team left them all to die, from this true story, you can tell, unlucky mountaineer will remain frozen in Rainbow Valley Of Everest. If you put yourself on that movie’s story as a strong climber who made it to the camp IV but left Yasuko Namba and Neal Beidleman to die in the storm, would you risk your life and go back to rescue them? Probably you don’t. That’s what everyone did. The lesson no one going to help you, either do it yourself or die. That is what it’s all about Rainbow Valley in Everest.

Why the dead bodies are everywhere in Rainbow Valley

The chances are when climbers die, high up in the elevation, the body remains there. Climbers need to sign authorizing themself either pay the amount to recover (over 70k+) or let stay on the mountain. Due to its extreme weather, it preserves the body for a decade like it seems nothing happened to the person. A lot of accident occurs in the death zone of Mount Everest, and most of the fatality is after the summit. Anyone who dies in the death zone, their graveyard, is Rainbow Valley. The trail to the death zone literally has no space to hold the dead body as only one climber will fit at a time. Anyone passed away along the way to the death zone; all other climbers will push the body away from the trail. Which eventually make it to the Rainbow valley.

Read More: How Difficult is Everest Base Camp Trek

Do they remove bodies from Everest

The next possible questions you might be thinking, why don’t they remove the body and delivered it to their family? Well, It’s not as easy as you imagine. Anyone died high up in the elevation. It’s almost impossible to recover the body because of the extreme weather. The helicopter can’t fly over or stay hold for search and rescue because of the strong wind. It has to be a human power to recover the body. But the question? Who on earth is willing to risk their lives, to recover the dead. Likely no one. That’s how the dead bodies are piling up, creating colorful graveyard by their clothes, making its name as Rainbow Valley of Everest.

Some (privileged people) bodies have been recover from the Everest with over 70,000+ USD. But this is not every family or their insurance company can afford. The cost might increase depending on how severe the situation and additional sources might need. Another side of the story recovering the dead body process has no certainty even if you are willing to spend 70K USD. 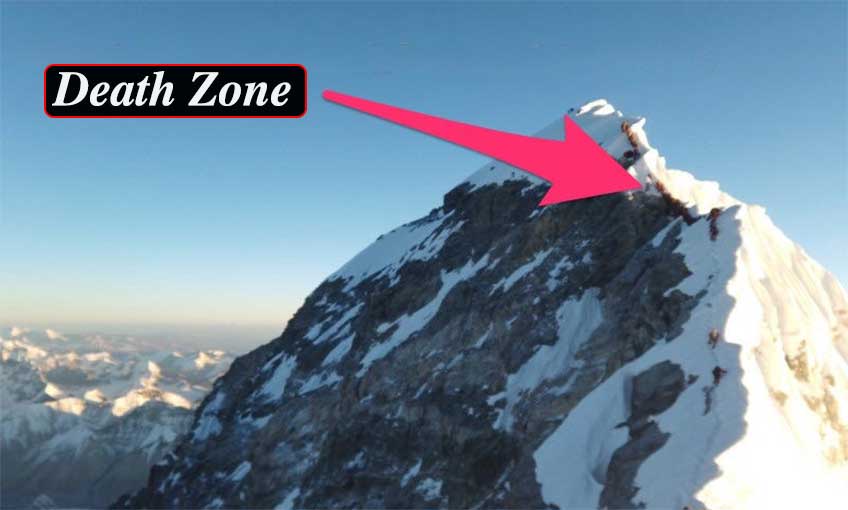 Where is the death zone on Mt Everest

Death zone in Mount Everest located just below the summit above 8,000m (26,247 feet) of elevation. Over 200 climbers have died only in this spot alone out of 295 since 1924. They call it a death zone; it’s because the human body simply can’t adjust the available oxygen here. When you are at this altitude, every breath you take only contains about one-third of the oxygen of that at sea level. Running out of an oxygen cylinder in this area means dying slowly from the suffocated. Anyone reaches this area; there is no chance of lingering or time for multiple selfies. Also, the trail is extremely narrow and no space for oncoming traffic.

Spring 2019 became the history of killing at least 11 people on Mount Everest, and 9 of them died in the death zone. The majority of them died because of running out the oxygen, causing them altitude sickness while waiting for human traffic.

What is the chance of dying on Mount Everest

Nearly 5,000 climbers have steeped on top of Mount Everest, and 295 of them have died since 1924 (Based on the Himalayan Database 2019), which is below 1% of a death rate. The death ratio on Moun Everest was high as 2.2% between the year of 1970-1980s. But as the year pass the death ration came down to below 1% in 2019. According to the report published in BBC, a majority of the death was caused by an avalanche (around 41.6%) while 22.2% of death on Moun Everest was created by actual mountain sickness.

And for all climbs above base camp in the region, the death rate has dropped from 3% in the 1950s to 0.9% over the past decade. For Sherpas, the Nepalese professional climbers hired to support mountaineering teams, and it has declined from 1.3% to 0.8%.

In 2018 about 800 climber summit the mountain making it the highest number ever stepped on top of Mount Everest in one year. Mount Everest is not as deadly as another mountain in Nepal. Annapurna I is the most dangerous mountain in the world over 8,000m. Which has the death rate of 35% compear to Everest, which is less than 1% of a death rate.

Where is green boots on Everest

One of the most well-known names during Everest Expedition is “Green Boots.” It is a nickname given to one of the corpses because of his bright green mountaineering boots. High up in the elevation of 27,890 feet (8,500 m), there is a cave and a dead body of Indian climber Tsewang Paljor on green boots and a couple of oxygen cylinders on his back.

He was part of the 6 Indian climbers. Based on the interview with team leader Harbhajan Singh told BBC Tsewang Paljor (A green Boots), and one of his friends, Smanla, made it to the summit. Up to now, Paljor (A green Boots) and his mate Smanla hold the record of the first Indian to summit Mount Everest from the Northside. On their way to camp IV, bad weather stricks them. From the image which is viral now as the name of Green Boots, he remained forever hiding in the cave alongside few empty oxygen bottles. Nobody saw Smanla but, It is believed that the remaining corps is Tsewang Paljor because he was wearing green boots the day he was last seen alive.

Read More: When Is The Best Time To Visit Everest Base Camp 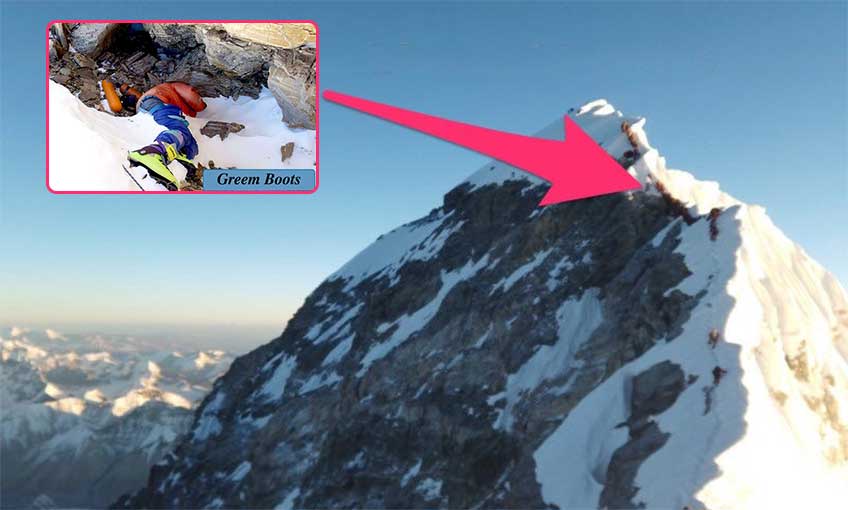 What happened to Green Boots body?

His body in 2014 went missing; presumably, it’s buried, or someone might have taken it. But in 2017, it came to visible. The body is still in the same spot as it is. Tsewang Paljor’s dead body up to now is serving trail maker as a map for those who are seeking to conquer the world’s highest mountain from its north face.

Unlike many who ended up in Rainbow Valley with no identification, Tsewang Paljor’s well-known name “Green Boots” is still guiding to the fellow climbers. 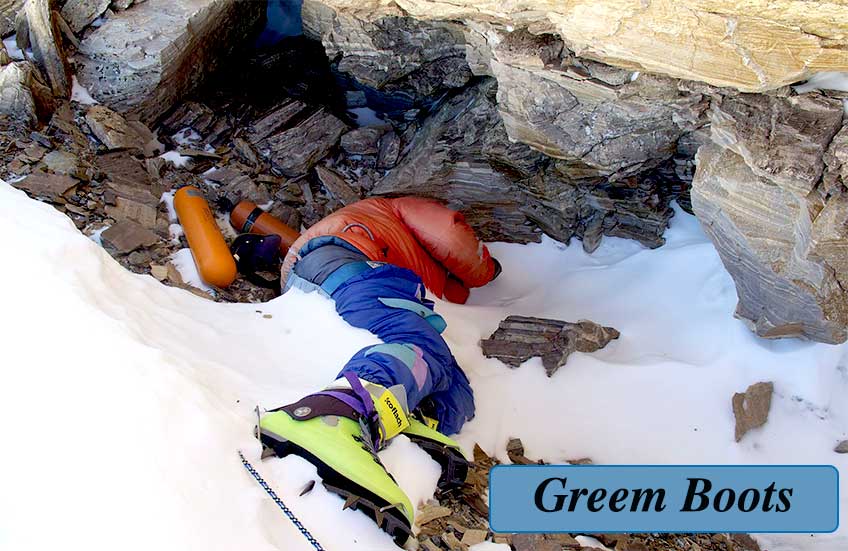 I know it’s not a funny topic, but I realize why not to cover the fact. And I guess it is what it is. It’s the climber knowing the Mountains are dangerous, but more and more people are drowning each season. By the end of this article, I probably read times 50 of the content size of what I just wrote. And learn most climbers only care about their goals. In the mountaineering ethic, it belives “Saving one life is more than 100 summits.” But more often climbers don’t care for others. The only dream is to stand up to the top of Mount Everest.

Regardless, how fearless the climbers are, no one wishes to be a flag of Rainbow Valley or end up like a Green Boots. If any climber reading this article who might embark on this mighty Himalaya one day, please keep in mind, “Saving one life is more than 100 summits.” Be kind to others and offer help even if you have to give up your dream.

When Green Boots’s story became viral, his family was heartbroken, knowing after all these years, their son is an alive story of a dead. Probably there is no other heartbroken family as much as Green Boots and anyone still being frozen in Rainbow valley. My sincere condolences to the family and wises to the departed soul may live rest peacefully in heaven.

Disclaimer: Please do not copy without source identification.