Home Blog Manaslu Trek Blog Manaslu Base Camp Trek
More often than not, when someone thinks of trekking in the Himalayas in Nepal, they refer to Base Camps. Nepal has close to 4,000 mountains above 5,500m, including, of course, the world’s highest peak, Mt. Everest, at 8,848m.  Thousands of elevations below 5500m are not on the list and not considered a ‘mountain,’ as Nepali people refer to those only as ‘hills.’  So please don’t get offended if they call other country’s highest mountain as a ‘hill.’
At present, some 300 or so peaks are open for mountaineering expeditions in Nepal.  That means, there are over 300 (or 326 to be exact) base camp treks in Nepal!! And for most travelers, they probably know of only one or two in Nepal.  While the number of days required to reach these base camps could vary greatly, it is around 14 days on average.  So you could say that it will take you at least a dozen years complete these base camps!!  That makes Nepal the ultimate place for trekking and hiking!!
Since you likely know already about Everest Base Camp (EBC) or Annapurna Base Camp (ABC), the two most famous and widely visited in Nepal. We thought to give you information about the 8th highest mountain in the world Mount Manaslu and its base camp.  As much as it deserves some three-letter names too, we cannot call it MBC, as that refers to Machapuchare Base Camp (the Fishtail Base Camp). 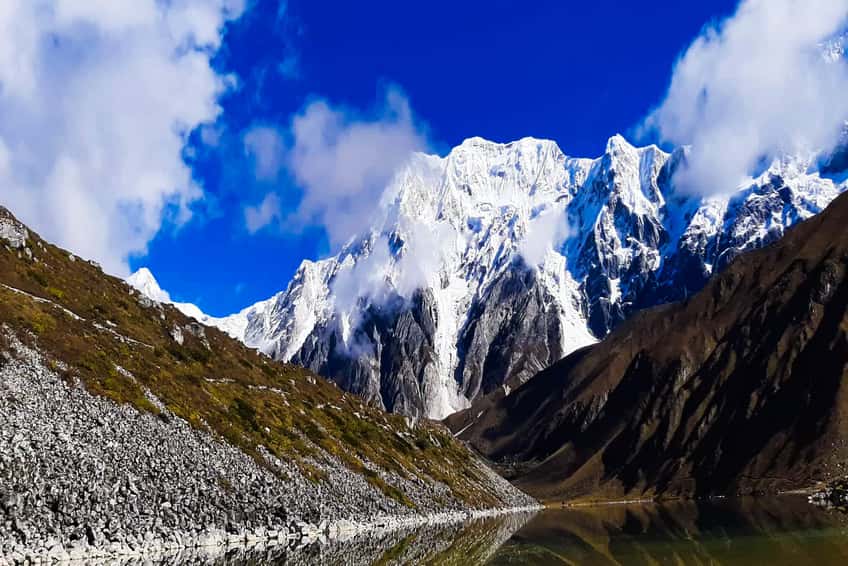 Where is Mt. Manaslu, and how to reach the Base Camp?

Set in the northern Himalayan range in the Gorkha District of Nepal, Mt. Manaslu stands out as the 8th highest mountain in the world.  Climbing and trekking this mountain is not as widely known as the other base camps, but it is gaining popularity, especially to those who prefer remote and off-the-beaten trails. Manaslu Trek is very remote that it is only possible to reach the jump-off point (either Arughat or Sotikhola) by private 4×4 jeep or a local bus.   A huge difference if you compare to Everest Base Camp Trek, where the flight to Lukla is possible.  The trek also requires at least ten days to reach base camp.

Why is it called Manaslu Circuit Trek instead of Manaslu Base Camp?

For Everest Base Camp and Annapurna Base Camp treks, the ending point of the trek is the base camp, and then from there, you return to your jump-off point.  For Manaslu, it is different.  Manaslu Base Camp trek is more well-known by the name Manaslu Circuit Trek. In this trek, Manaslu Base Camp is not the destination but is instead only a side trip.

For the Manaslu Circuit Trek, you are making a loop in your trek where you so you start in Sotikhola or Arughat, reach the Tsum Valley, stop by Manaslu Base Camp, cross Larke pass and then end up your trek in Besi Sahar in the Annapurna region.  In Base Camps treks, these usually are your main destination, and then you typically return to where you started.  For a Circuit trek, the starting point and endpoint are always different.
Famous base camp treks include Everest Base Camp,  Kanchenjunga Base Camp, and Annapurna Base Camp.  Annapurna Circuit is a popular circuit trek in Nepal.

What is the typical Manaslu Base Camp Trek itinerary?

For example, some of the possible side trips during the trek are Manaslu Base Camp, Birendra Lake, and the Tibetan border.  There is also the Tsum Valley side-trip during Manaslu trek, which is highly recommended by many trekkers.  Note that if you want to include Tsum Valley in your itinerary, then be prepared to spend 22 days from Kathmandu and back. The best time of the year to go to Manaslu is in  October, November, March, and April, where the 14 days Manaslu trek is good enough as the road condition can push your itinerary a few days ahead.

How much has the Manaslu Base Camp Trek Permit cost?

Anyone who wants to travel to Manaslu should also know about the Manaslu trekking permit rule by the Nepali Government.  Due to the open border with Tibet in this region and to control unnecessary border exit by any foreign citizen during the trek, no one is allowed in the Manaslu without a special permit issued by the government. An authorized local Nepali trekking member should also accompany it.  To avoid this trouble in the mountain, please be aware of the requirement of permits for any trek. Also, compared with other treks such as EBC or ABC, the Manaslu trek cost is higher, and this is mainly due to the special permit mentioned above.