“Everest base camp trekking” is one of the most adventurous and fulfilling treks you can choose in Nepal.  The very first reason itself is being in the abode of the highest mountain peak in the world!, majestic Ama Dablam to the south, the heart chilling Khumbu glacier with gigantic tunnels like snow caves and its fearsome openings. Surrounded by peaks and mountain ranges, there are beautiful valleys with intact traditional villages and Sherpa Buddhist culture thriving in their own world of high land surrounded by Himalayan peaks.

Recently, I met an experienced hiker Mr. Eric Swithin here in Houston TX United State, who highlighted the subject of this article. He had a lot of questions but one of them was ” When is the Best Time to trek Everest Bse Camp”?. When I get back home and I realized, the same questions I answer to him, why not to share with you all. I have all of his questions on my list to answer but particularly in this article, I am going to talk about Everest Base Camp Trek Best Time of Year. Indeed, this is the first question probably everyone wishes to know before taking this journey.

While some global leader(s) around the world still argue that climate change is but merely “theoretical”, people who are living with nature in the high mountains, along river banks and basins know how much has already changed in the decade?  God willing! if melting glaciers could hold up for controlled discharge, warming has preceded the snow cover area in the Himalayas.  Both the impacts of climate change (positive and negative) are felt in the Himalayan region depending on the subject under discussion.  For trekking in the high altitude frequently harassed by heavy snow cover, receding snowfall is increasing the window of trekking seasons which is not updated (for technical reasons) in the standard itinerary.  Keeping intact the regular trekking season in Nepal which is available online, I would like to bring to light the impact of weather changes due to global warming specifically pertaining to Everest Base Camp trek Itinerary 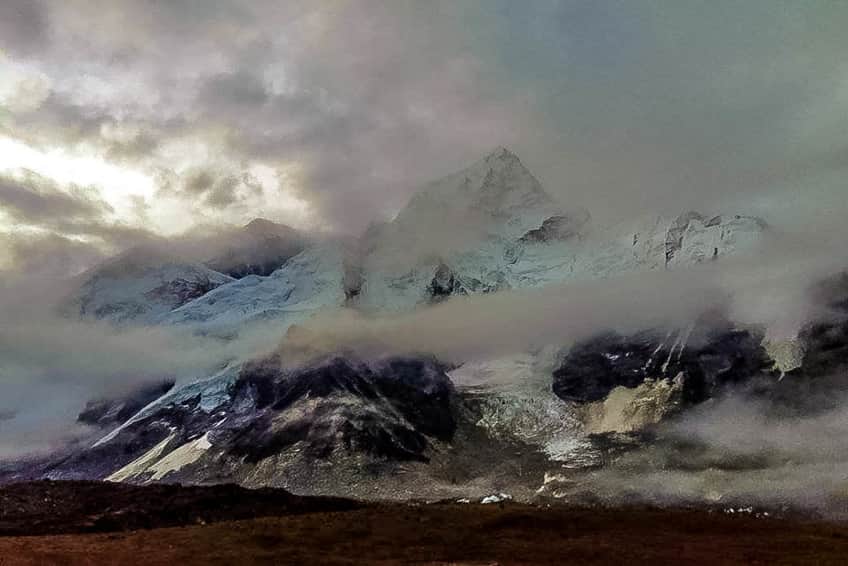 During this period from September till November, Nepal offers a clear cloudless sky to see a stunning view of the Himalayas from any corner of the country. In addition, this also is the perfect time to visit Nepal as there are several important cultural festivals held such as Teej, Gaijatra, Dashain, Tihar, Chaat, etc. The temperature range is just perfect in between 15-25-°C (59-77-°F).

If you are planning any of the major trekking routes Everest base camp, Manaslu, Annapurna or Kanchenjunga during fall, I would recommend a slightly varying window from Mid-October till Mid December although all online available reference insist from Sept to Nov.  The rainfall in the Himalayas during summer due to heavily moisture-laden Monsoon wind from the Indian Ocean moving north to the Himalayas, in reality, is following a “shift” in timing due to which the month of “September” which according to many references and standard guidelines consider “ok” after monsoon which in my opinion cannot be taken up as receding monsoon rain continues till the end of September or some year up to the first week of October.

Important notice for hiker, planning their trip to Nepal EBC during Autumn 2019

The weather has a direct impact on flights to Lukla where about 500 tourist travels by flight daily during peak season.  Clear sky and warm sunlight continue till mid-December and consequently, the traffic on the trail is much reduced during this time.

Spring season is the second-highest number of trekking tourist arrivals in Nepal. And also a best time for Everest Base Camp Trek. The temperature is mildly warm in the lowland and moderate in the high altitude. The average temperature of the capital Kathmandu is 15-20-°C (59-68 °F) during this time.  After a long winter in the higher altitude, spring is welcomed by various types of flowers blooming not just at homes and in the parks but whole mountain slopes covered by varieties of rhododendron amongst others which are also the national flower of Nepal.

Everest base camp trek during the spring season is also the best.  During this time the snow coverage on mountains and peaks is still substantial to capture your imagination.   It is also during this season that the Everest expedition crew starts their onward journey and camping at the base for preparation.  Most online references and guidebooks specify the month of May as critical with regards to the beginning of monsoon season but in reality due to the weather pattern “shift” monsoon rainfall begins after mid-June.  Therefore, we recommend that you may quite comfortably plan your trekking without hesitation during the month of May and consequently take advantage of less traffic on the trail.

This period, also known as the monsoon season is hot and humid.  The sky is mostly covered by clouds that obscure all the mountain views.  Pokhara receives the highest rainfall of 830mm and average rainfall throughout the country is 500-550mm.  Due to high mountains, the clouds moved by the wind that follows the valleys, rainfall and rainfall intensity varies with places.  However, the sky sometimes could be clear in the morning but clouds start to cover up during the day.

In general, Everest Base Camp trekking at this time of the year is not recommended.  A flight delay is normal, trails could be slippery, loose soil and the most critical of all are the landslides, falling boulders, trees, rivers, and streams.  Officially, the monsoon this year (2017) started from the 2nd week of June (theoretical arrival of the monsoon wind from the Indian Ocean to the landmass) and not May as per standard guidelines but in reality, the rainfall started much later.  This has been the general experience for a couple of years. Therefore, we recommended you to manage this trek before the second week of June as the trekking traffic is much lean during this time if you wish to trek with fewer people on the trail.

Winter in the Everest Base Camp is very harsh, temperatures constantly change between minus 10 to minus15-°C during the night to a maximum of 15 to18-°C during sunny days.  Besides the extreme cold, a strong wind is a major factor with wind speed fluctuating from 10 to 12 mph during January and February creating hurricane spiraling around the base camp and high passes. Instead, this season is particularly good for trekking in lower elevations. The morning and night stay cold and the days are warm when sunny.  The sky is clear with occasional snowfalls at high altitudes.

Trekking to Everest Base Camp till the 3rd week of December is good there will be less traffic.  However, from the last week of December heavy snowfall will start at high passes such as Chola Pass and Renjo La. The local tea house remains closed for winter.  One of the attractions of the Everest region the famous “Gokyo Lake” will be frozen. Often there are missing trekkers making a top story in the news headline and I do not want you to be one of them?  If you are trekking independent please gather enough information before heading into this high altitude and I highly recommend not to try high passes without a local guide during this time of the year.

My Story with Eric

Earlier in this article, I wrote how I was inspired to write this post and I realized my story was not complete. Here is my full story with Eric and our upcoming trip to EBC.

One sunny afternoon and all because of buying and selling items online, I had a privilege to meet a friend named Eric.  Our small business transaction turned into a newfound friendship and all because we shared the passion for outdoor and hiking.  He was wearing a t-shirt with ‘Outdoor Adventure’ written in front while I was wearing a shirt with camping gear printed everywhere. A former Nuclear, Biological, Chemical Recon Specialist at the United States Marines and also a father to the fatherless boys. He is the Executive Director and Founder of Outdoor Adventure a non-profit organization. The team organizes walkabout in a various program incorporates sports, life-skills training, and Biblical discipleship. Essentially, they offer these boys positive adult male role models to help them grow into men.
I had a privilege to attend as a volunteer in one of their Boot camps held in San Antonio with the Outdoor Adventure team. Eric introduced me with few other volunteers (Zack, Dave, John, Sam, and Richard) also keeping Everest Base Camp as in their bucket list. It was an honor for me to be at that boot camp and a great opportunity to share my hiking and trekking experience to motivate them to see my country. The next year we all agreed to Trek Gokyo Chola Pass EBC + Island Peak (20,305 ft) together and once again I am returning back to EBC after many years with this team.