The months from September to November and March to May are the best months to trek in Nepal. It is no exception for trekking to Makalu Base Camp.

Akin to any other trekking routes in Nepal, autumn season from September to November, and spring from March to May are the best time for Makalu Base Camp trek. Weather conditions in both the seasons have ample clear skies with pleasant temperatures offering you the amazing views of the highest mountains you are chasing after

The off-the-beaten-trek route leads you deep into the mountains to the foothills of fifth-highest Mt. Makalu with an elevation of 8,481 meters. Though the trail features appealing beauty and thrill of hiking, it welcomes fewer numbers of trekkers in comparison to the most popular destinations such as Everest Base Camp (EBC), Annapurna Base Camp (ABC), and Annapurna Circuit. The trail deserves to be perfect for purist trekkers seeking solitude in the quietest corners of the Himalayas. This route stands as one of the best trekking destinations in Nepal before a crowd of trekkers trod the mountains.

Makalu Base Camp trek, which is a less trodden trail, is a must-visit place for the adventurous trekkers. This stunning and challenging route is situated between the highest Mt. Everest (8,848m) and third-highest Kanchanjangha (8,586m), still standing as off the radar for most trekkers.

Makalu Base Camp trail snakes through lush Arun and Barun River valleys canvasing splendid views of mountains such as Makalu, Everest, Lhotse, Baruntse, Kanchanjangha, and Jannu peak. You can encounter a unique eastern face of Mount Everest, perhaps never witnessed before, even in photographs.

Despite not being the easiest in the difficulty score, the trail stands as one of the highest on the scale of beauty and adventure. If you expect to experience wilderness, spectacular natural scenery, amazing culture, and raw adventure. Makalu Base Camp Trek will offer these traits all with less number of tourists. Although the trail is referred to experienced hikers, less experienced trekkers with some preparations and guidance can do it successfully making high scores. 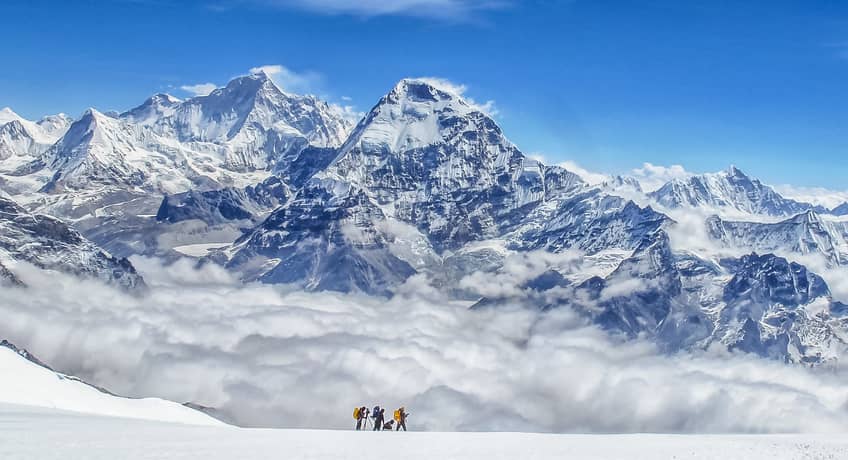 Highlights of the Trip

If you are wondering when would be an ideal time to hit the trail, based on our experiences, NEST Adventure knows trekking throughout the year and make the best out of every weather conditions.

Autumn is known as the best season to trek in Nepal for a reason. Skies stay clear with little rainfall. Daytime temperature stands pleasant and sunny. The nights won’t be harshly colder. However, the mercury may fall below freezing point during nights at par the variation of altitude. The temperature drops 6°C on average at every 1,000 meters you gain in altitude. High passes are less likely to be blanketed with snow during September to November. As per the unexpected nature of changing weather in the Himalayas, you need to pay extra attention to the weather conditions and updates on the day of crossing passes Kauma La, Tutu La, and Keke La.

The month of September still has some traces of monsoon left in the sky. The rain may not completely stop until the last week of September. The rain, fog and cloud cover can disrupt the flight schedule from Kathmandu to Tumlingtar. You need to be prepared for the worst. Usually, the best weather window to trek to Makalu Base Camp is between first weeks of October to mid-December. However, some high passes remained closed for few weeks in the autumn trekking season of 2019 due to early winter rains that brought heavy and repeated snowfall in high altitudes.

Spring is the second-best time for a Makalu Base Camp Trek.  the season of warm and sunny weather, Spring witnesses occasional snowfall at high altitudes. You are likely to trample snow and ice on high passes. And, the sky remains mostly clear offering mesmerizing views of mountains. The mercury keeps going up as the summer approaches. Greenery and a myriad of colors beautify the surroundings in this season as the whole mountainside brings the full bloom of wildflowers and Rhododendron.

While the winter recedes back to the mountains from March, there is still a chance of snow together with rain in the months between March to May. In 2019, several trekking routes were closed for more than two weeks. Heavy snowfall in February and March blocked trekking routes and took longer than expected to reopen them for trekkers.

Before venturing out on a remote trail, we suggest you to keep updates with weather forecast. When you are in remote routes like Makalu Base Camp where internet connectivity is non-existent, you must remain in touch with your travel agency for weather forecast before proceeding to the high passes. NEST Adventure always provides weather reports and updates to our clients while they are on the trek.

Besides, trekking is still possible in Nepal during the seasons of winter or monsoon if you take extra precautions. To tolerate high and low temperatures and erratic weather conditions. If you prepare well and manage the best use of weather window to cross three passes on the fifth and 11th days, you can trek even in the off-seasons. Unpredictably beautiful Makalu Base Camp Trek lets you experience unique and exceptional moments with wonderful and outstanding views in each season.

It is to remind if the weather is bad, and snowfall is likely to happen, it is advised to avoid crossing three passes Kauma La, Tutu La, and Keke La.

Have weather forecast in advance just to make sure you will not be trapped in the middle of the trail where there are no proper infrastructure to take shelter. Talk to your guide and even the owners of teahouse as they often have updater weather updates. NEST Adventure team based in Kathmandu is always willing to help you with taking weather precautions. Stay connected whenever possible!

The best part hiking during off-season is, the number of trekkers will go down significantly. However, you will get the best opportunities to enjoy food and accommodation at cheaper and discounted rates. The tea houses offer special discounts on their services during winter. The only thing you need to prepare to save you from harsh cold during the winter; having extra warm clothes, gears and a bit flexible itinerary to avoid the unexpected weather changes and snowfalls. People living in higher elevations prefer to descend down to lower areas during winter. The tea houses may remain closed during peak winter. We at NEST adventure will ensure the available of facilities during the winter before you decide to experience the biting cold temperature of the Makalu Base Camp.

This season brings heavy rainfalls in the lower altitudes of Nepal. It may cause floods and landslides. Due to rise in temperatures and erratic and heavy rain, humid weather, insects like mosquito and leech can be nuisances during the trekking. So, you should not forget to stuff raincoat, rain boots, rain covers, insect repellents and heat defenders while trekking during monsoon season. However, you can entertain special offers and discounts on accommodation and food in this season like in winter.

Makalu Base Camp trek remains beautiful and thrilling throughout the year. Whether you like to go gently on a pleasant weather or take a challenge to experience the extreme weather conditions of the mountains. Makalu Base Camp keeps its doors open all the time. NEST Adventure will help you make a right decision and stay safe during your adventure of a lifetime to the base of Mt. Makalu.